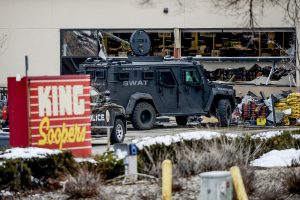 Ten people have been killed after a gunman walked into a grocery store in Boulder, Colorado, opening fire on shoppers late Monday afternoon. Among them was a police officer who was the first officer to arrive at the scene of the King Soopers grocery store.

Authorities now say that 21-year-old Ahmad Al Aliwi Alissa is in police custody and has been formally charged with 10 counts of first-degree murder. While investigators say they are probing into Alissa’s background, he has lived in the United States for most of his life.

Others who lost their lives in this tragic shooting, according to Boulder police, are:

“This is yet another in a long string of horrific tragedies, from Boulder today to Atlanta last week to the dozens more people in the United States who are shot every day, but whose stories do not make the headlines,” said Feinblatt. “To save lives and end these senseless killings, we need more than thoughts and prayers — we need federal action on gun safety from the Senate and the administration, and we need it now.”

The post 10 Killed in Boulder, Co. Supermarket Shooting appeared first on The Source.