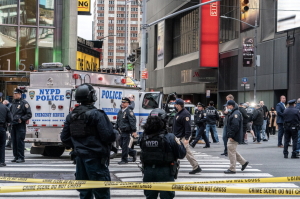 Three people were hospitalized Saturday evening after a shooting in Times Square left people hospitalized and, a 4-year-old girl, injured. Now, NYPD is on a manhunt for the gunman responsible.

In a report by NBC New York, NYPD Commissioner Dermot Shea confirmed at an evening press conference that the three victims were not the shooter’s targets and were not related to one another.

According to NYPD, a man identified in a surveillance image distributed by police late Saturday is wanted in connection to the shooting.

Commissioner Shea confirmed that shots were fired right around 5 p.m, after a reported dispute between a group of men. According to nearby witnesses, the men were arguing when one pulled out a gun and started shooting, striking the innocent bystanders.

NBC New York Reports, uniformed officers were near the scene of the shooting – W 44th Street and 7th Avenue – when shots rang out. People in the area were advised to expect delays as police closed off 7th Avenue between 45th and 43rd Streets.

“The first person shot is a 4-year-old female from Brooklyn. She was shot in the leg and it is believed she is undergoing surgery,” said Shea. He also added that the girl was shopping for toys with her family at the time of the shooting. Read the full story here.

The post 3 Bystanders Injured In Times Square Shooting appeared first on The Source.