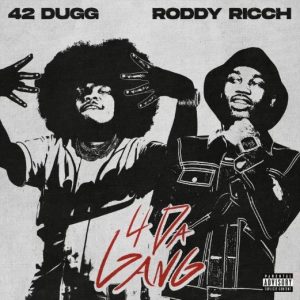 42 Dugg is back with a new banger, releasing the electrifying “4 Da Gang” and enlisting Roddy Ricch on the feature. The new single shows the versatility of Dugg in the booth and samples German Rock Band Scorpion’s 1982 classic hit, “No One Like You.”

The new take on the legendary rock single is produced by TayTayMadeIt and this is the first release for Dugg of 2021.

4 Da Gang comes on the heels of a busy stretch for Dugg, who recently appeared on projects for a bevy of established and rising stars, including Meek Mill’s Quarantine Pack, Big Sean’s Detroit 2, EST Gee’s I Still Don’t Feel Nun, DDG & OG Parker’s Die 4 Respect, Lil Migo’s King of The Trap, and more.

You can hear the single below.