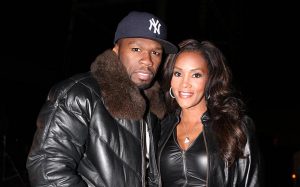 Vivica A. Fox went viral for admitting that 50 Cent is the love of her life and he “isn’t bothered when she says that.”

In a recent interview with Vlad TV, the actress shed light on why the ex-couple split in the early 2000’s.

She admitted that the publicity surrounding their relationship “killed” it.

“He’s such a gentleman, he’s very generous. I know him as Curtis, always will,” Fox said. “What killed the relationship is that we just went way too public way too fast. The love that I had for him and still to this day. … He was the love of my life, I will admit that without any reservations. He will always have a very special place in my heart.”

50 Cent addressed the comments during an interview with Kris Kaylin. “I’m never bothered by when she says that,” he said. “At the time that we actually interacted with each other, we weren’t conscious of everything else that was going on.”

The mogul agreed with Vivica and suggested that their relationship might have survived if there weren’t so many people in their business.

“It got so uncomfortable with everybody else,” he said. When you gettin’ pushed and pulled in different directions, without it even being her decision. Her publicist would say, ‘do this,’ this person [would say] ‘do this.’ And then you go, ‘All right, this is not the right thing.’”

Fif’ also confirmed that he planned to propose to her but turned the 12-carat ring into earrings when he got upset with her.

50 Cent’s current girlfriend, Cuban Link, also commented which resulted in a subtle clap back from the Set It Off actress.

Cuban wrote, “Awwww” and inserted a violin. Fox responded, “Well! This is getting good cause I tried to post 3 times on @ShadeRoom,” Vivica wrote. “Now @_Cuban_Link what that clip didn’t show was that I said he now has a hawt gurlfiend & Im happy 4 him! So stay in ya bag boo dont get nervous! Im good! “

The post 50 Cent Responds to Vivica A. Fox Saying He’s The Love of Her Life appeared first on The Source.