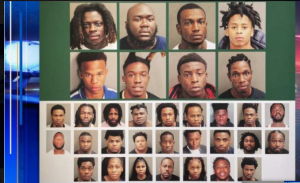 According to local news affiliate ClickOrlando out of Florida, rapper 9lokknine and Interscope singer Hotboii were among almost three dozen people hit with racketeering and/or drug trafficking charges in Orlando today (July 2).

The Orange County Sheriff’s Office held a news conference to explain the success of the Metropolitan Bureau of Investigation’s Operation “X-Force.” The nine-month, covert operation began as rival gangs, Army and 438, feuded throughout the Orange County area.

The MBI, Orlando Police, FBI, DEA, and ATF joined Orlando Sheriff John Mina, where he claimed that the feud was responsible for “over 30 shootings and several homicides”, stemming from beef over women, territory and music.

Authorities reported that they discovered 15 guns and 13 auto sears from 9lokknine’s home, Sears are devices that turn semi-automatic weapons into fully automatic weapons.

In total, 34 people have been arrested as a result of the investigation, and 32 are facing racketeering charges.

The post 9lokknine And Hotboii Among 30+ People Caught In Orlando R.I.C.O. Sweep appeared first on The Source.