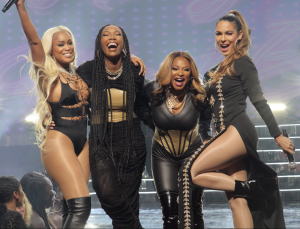 ABC released a first look at it’s upcoming series Queens, and we spot some familiar faces! The upcoming drama has an impressive list of leading ladies for the show. The upcoming drama stars Eve as Brianna aka Professor Sex, Naturi Naughton as Jill aka Da Thrill, Nadine Velazquez as Valeria aka Butter Pecan, Taylor Selé as Eric Jones, Pepi Sonuga as Lil Muffin and Brandy as Naomi aka Xplicit Lyrics.

Written by Zahir McGhee, Queens is one of several series set to come to TV in 2021 and 2022. According to the network, the series is following the journey of four women in their 40s that are reuniting for a chance to recapture their fame and regain the swagger they had in their ’90s group that made them legends in the hip-hop world.

From the looks of the trailer, the last full of hip hop and r&b legends will bring nostalgia and authenticity to the show.

The post ABC Releases A First Look At New Series Queens appeared first on The Source.