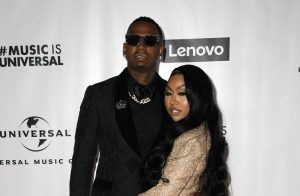 Social media users can either love you… or hate you. In most celebrity cases, if you show them love they will show you love back, but if you show hate, they have no problem clapping back. Social media influencer and Instagram model, Ari Fletcher is no stranger to clapping back at haters in her comments.

Fletcher, girlfriend to MoneyBagg Yo was showing off her new hairdo, done by celebrity hairstylist Arrogant Tae, before haters jumped in the comments criticizing the model’s look. “Stop worrying about my cheeks cause when I start calling ya’ll broke ya’ll gone get sensitive…play nice!” Fletcher penned on Twitter after seeing some negative comments regarding her cheeks online.

“But why does Tae use that filter” one fan commented. “Because that’s what he woke up and decided to do. If you sit in that chair you gone get whatever filter he choose,” Fletcher responded.

It didn’t stop there. Fletcher then posted a public service announcement to her Instagram. “Im done being nice to you b*tches,” Fletcher began. “Over this past year I been being real cool, real calm, real collective” she continued.

“You b*tches, know its over,” Fletcher said before ending the video. Check out the full clip below.

The post Ari Fletcher Fires Back at Online Haters appeared first on The Source.