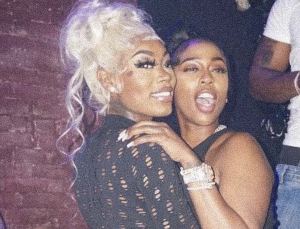 While there may have been a few sneak disses over the years on who started the “doll wave” it seems as if both Asian Doll and Kash Doll are ready to put the beef behind them.

In the past, Kash Doll reportedly stated that Asian Doll didn’t like her over a man, believed to be 600 Breezy. Followed by Asian Doll saying she would work with the Detroit rapper, just to body her on a song, which Kash Doll didn’t take lightly. Regardless of the tea, both female emcees seemed to be enjoying a night out together after Asian Doll posted pictures of the two on Twitter with the caption, “Me & @Kashdoll [red heart emoji] Da dolls fasho.”

While some fans were here for it, one fan seemed to have wanted to check Asian on her actions. “Now Asian…” the fan wrote.

“It’s called growing up I literally don’t want no drama with nobody,” Asian began. “It was good seeing her tho frfr look how far we came I’m going through to much to be beefing over nothing,” she wrote with a 100 sign emoji.

Breezy seemed to be here for the two settling their differences as well, the “Love Someone” rapper quoted the picture of Asian and Kash Doll saying, “I love this,” followed by three heart eye emojis.

It’s always a good thing when women in the rap industry can settle their beef. Women sticking together can never go wrong. Cheers to woman empowerment!