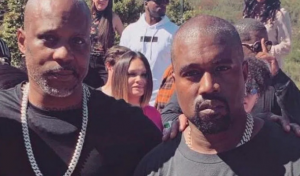 Previous reports suggested that rappers DMX and Kanye ‘Yeezy’ West planned to collaborate after X appeared at Kanye’s church services. Both rappers have forever marked their names in hip hop and publicly expressed themselves to the world. Following DMX’s untimely passing, it’s no strange surprise that the MC turned fashion mogul would create a tribute to the late Yonkers rapper.

Yeezy asked the luxury fashion house Balenciaga to design a T-shirt in tribute to the late artist Earl Simmons, aka DMX.
A tribute to the artist and his fans with the proceeds benefiting the Simmons’ family. CLICK HERE for more info.

The post Balenciaga DMX Yeezy A Tribute appeared first on The Source.