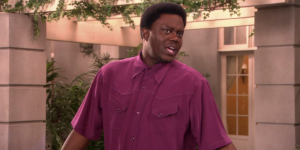 Bernie Mac’s daughter spoke with TMZ about who she thinks would be a good actor to portray her father in his biopic. According to Je’Niece McCullough, she believes Aldis Hodge, Mark Phillips would be a good match.

Hodge is known for his roles in One Night In Miami, The Invisible Man, and the WGN series Underground.  McCullough reportedly said he’s a great actor with a similar complexion to Bernie. She also believes he’s the “perfect A-lister to play her dad as an adult”.

If producers plan to portray Bernie in his younger years, McCullogh believes YouTuber Mark Phillips is someone to consider. According to Mccullough, her daughter loves him, and always says how much he reminds her of Bernie. She also believes that Mark is funny and could accurately capture her dad’s essence.

Previously reported by The Source, Bernie Mac’s life story is coming to the big screen soon. John Legend’s production company Get Lifted is developing a film about the late comedian’s life. The project is being co-produced with Mike Jackson, and with the approval of Mac’s estate. Jackson reportedly broke the news during a panel discussion at the 2021 Tribeca Film Festival.

“We just partnered with Bernie Mac’s estate to cover Bernie Mac’s story,” Jackson said, seemingly surprising Legend as he said the info was “something that John doesn’t know about yet” and that he was “very excited about” the deal, which “just happened today.”

“Look at you breaking news over here,” Legend said in response.

The movie-makers said the project will be a feature film biopic.

Further details were not revealed, but Jackson explained that the project marks a full-circle moment as Legend appeared in one of Mac’s final films.

“The Soul Men reunion you all wanted to see,” Legend said. In the 2008 film, Legend portrayed Marcus Hooks, the bandmember Louis Hinds (Samuel L. Jackson) and Floyd Henderson (Mac) honor in a reunion concert after he passes away.

“It’s about the opportunities to tell a story that you feel are important,” Jackson said.

The post Bernie Mac’s Daughter Names 2 Actors That Could Play The Comedian appeared first on The Source.