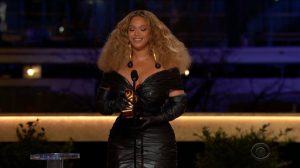 Beyoncé joined Megan Thee Stallion on stage at the 2021 Grammys to accept an award for their “Savage (Remix).” As the duo attempted to leave the stage they were halted by host Trevor Noah who revealed Beyoncé at that moment became the woman with the most Grammy wins in history. She is also the vocalist with the most wins in history.

The post Beyoncé Becomes Vocalist with Most GRAMMY Wins in History appeared first on The Source.