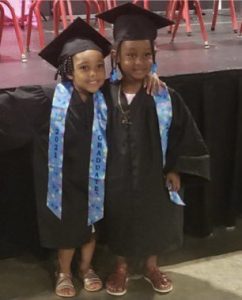 You may know them from the popular Instagram series hosted by Laron Hines titled, “Are You Smarter Than a Preschooler.” Social Media’s beloved toddlers Jabria Mccullum and Lauri Norah have officially graduated preschool and are on their way to kindergarten.

In the viral TikTok videos, Jabria, who happens to be the godsister of Hines, and Lauri can be seen being asked a series of questions with other familiar faces like Zane, Ryan, Jaden, and more. In the series, when not answering tough questions, the toddlers can be seen dancing alongside Laron, who is a talented singer. Immediately, both Jabria and Lauri became fan favorites and stole the heart of their viewers.

Just last year, Laron Hines spoke on the success of his TikTok series on the Tamron Hall show. “Honestly, I had no idea. I just realized that…people would love to see the kids, especially ’cause it was at the beginning of quarantine,” he began. “So I knew it would give people something to smile about but I didn’t know it would do as well as it did…my first video got a half a million views in just less than 24 hours, and that was a complete shock to me.”

Congratulations to Jabria and Lauri, and the rest of the preschoolers who are moving forward to kindergarten! We love to see it!