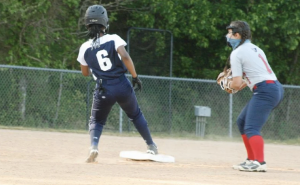 A North Carolina High-school is under scrutiny after requiring a 16-year-old black student to cut her hair in the middle of a softball game to continue playing.

Today reports, Nicole Pyles, was wearing her hair in braids with beaded accessories before her softball team’s final home game of the season on April 19, when the umpire told her coach that her hairstyle made it difficult to see the number on the back of her jersey. According to Nicole, she tucked her hair inside the collar of her shirt, but another complaint was made in the bottom of the second inning.

In an interview with the Today show, the high-school Pyles, 16 said

In a statement obtained by TODAY, the North Carolina High School Athletic Association said that they were following a regulation from the National Federation of State High School Associations, which provides uniform playing rules nationwide.

“As a member of NFHS, the NCHSAA follows all NFHS playing rules and regulations, including Softball rule 3-2-5 which states that ‘Plastic visors, bandanas and hair-beads are prohibited,’” said Commissioner Que Tucker in the statement. “This is not a new rule and when the violation was noticed by an umpire, the proper determination of illegal equipment was verified supported by the NFHS rule.”

Durham Public Schools, the district that includes both Nicole’s team and the opposing team, also released a statement, Wednesday, May 12 the district reportedly said they are “actively investigating the circumstances” that led to the incident.

“Durham Public Schools recognizes that the National Federation of State High School Associations has a specific rule (rule 3-2-5) against hair-beads, however, DPS believes this rule is culturally biased,” said the district.

The post Black Highschool Student Made To Cut Braids During Softball Game appeared first on The Source.