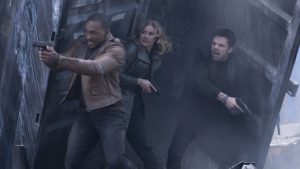 The MCU treated fans of Disney+’s The Falcon and the Winter Soldier to an unexpected surprise during a pivotal third episode of the new action Avengers spinoff series. A familiar face from Wakanda made an appearance.

Ayo, a Dora Milaje warrior played by Florence Kasumba, storms into the show on episode 3. Ayo hops into the action after Bucky (Sebastian Stan) tracks down Wakandan tech where he and the Falcon (Antony Mackie) are hot on the heels of Zemo (Daniel Brühl). But also hunting Zemo is Ayo, who wants him out of revenge for the death of King T’Chaka, who last appeared in Captain America: Civil War, played by veteran actor, John Kani.

Ayo’s unexpected entrance into the storyline will remind fans of the MCU, of her first appearance in Civil War. In that blockbuster film she was connected to Bucky, Falcon, and Zemo. It’s a timely highlight for fans who will be seeing more of Wakanda without the late Chadwick Boseman, as the beloved King T’Challa aka The Black Panther.

We know Wakanda is moving on or at least we think so, but one may infer that the futuristic but isolated African metropolis has seemingly come to grips with unsaid events that may or may not lead to a new king or queen and successor to T’Challa. Who knows at this point but we all are eagerly awaiting the how and why but that won’t be answered until Black Panther 2 claws it’s way back to theaters.

Here’s a (Spoiler) clip of the scene from The Falcon and the Winter Solder:

The post ‘Black Panther’ Wakanda Surprise In ‘The Falcon And The Winter Soldier’ Series appeared first on The Source.