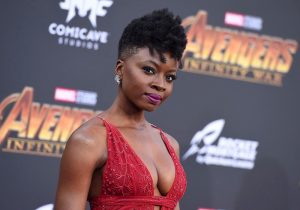 As originally reported by a deep-diving feature in The Hollywood Reporter, revealed Danai Gurira’s involvement in a Black Panther ”origin spinoff series for Disney+”  Although there is no official confirmation that this dope series is the same one in development by Black Panther director Ryan Coogler, which will focus more on Wakanda and its people, it makes sense to guess that this is the same series.

This new series would arrive after the Black Panther sequel set for theaters, Black Panther: Wakanda Forever. Gurira will reprise her role as Okoye.

But as Shadow & Act reported in February, Coogler and his production company Proximity Media will develop several TV series with Disney under a lucrative five-year deal, with the Wakanda-based series being first, taking aim at characters to further define the fictional kingdom.

“It’s an honor to be partnering with The Walt Disney Company. Working with them on Black Panther was a dream come true. As avid consumers of television, we couldn’t be happier to be launching our television business with Bob Iger, Dana Walden and all the amazing studios under the Disney umbrella,” said Coogler regarding the deal. “We look forward to learning, growing, and building a relationship with audiences all over the world through the Disney platforms. We are especially excited that we will be taking our first leap with Kevin Feige, Louis D’Esposito, Victoria Alonso and their partners at Marvel Studios where we will be working closely with them on select MCU shows for Disney+. We’re already in the mix on some projects that we can’t wait to share,” said Ryan Coogler on behalf of Proximity Media.

But having Okoye who is also known as the main character in the decades-long The Walking Dead don AMC, as the central character of the spinoff series also makes sense, since she was one of the foremost characters from the first Black Panther movie. I’m definitely here for it, so let’s get it, Disney+

The post Black Panther’s Danai Gurira to Star in Marvel Spinoff Series on Disney+ appeared first on The Source.