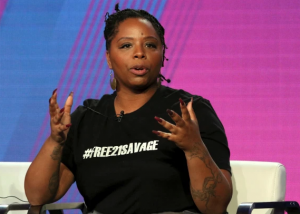 According to a report from the New York Post, NYC’s Black Lives Matter chapter chairperson Hawk Newsome has called for an investigation into one of the co-founders’ finances after purchasing real estate totaling $3.2 million.

Newsome has called for a probe into Patrisse Cullors’ financial records after the BLM co-founder bought four homes, including a $1.5 million home in the white, residential area of Topanga Canyon in L.A. County. According to the report, Cullors and her wife, Janaya Khan, own a custom ranch that is equipped with a airplane hangar in Georgia as well as a $500K, three bedroom home in Inglewood, CA.

“If you go around calling yourself a socialist, you have to ask how much of her own personal money is going to charitable causes,” Newsome said. “It’s really sad because it makes people doubt the validity of the movement and overlook the fact that it’s the people that carry this movement.”

The New York Post also reported she was looking at property at a Bahamas resort, where Justin Timberlake and Tiger Woods both have homes. Luxury apartments and townhouses at Bahamian resort are priced between $5 million and $20 million.

“She had a lot of options on where to live. She chose one of the whitest places in California,” tweeted sports journalist Jason Whitlock. “She’ll have her pick of white cops and white people to complain about. That’s a choice, bro.”

Cullors has yet to respond to any of the allegations.

The post #BlackLivesMatter Calls For Investigation After Its Founder Purchased Four Homes Worth $3.2M appeared first on The Source.