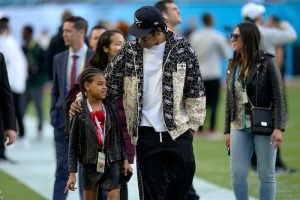 The GRAMMY Family is expanding. Blue Ivy Carter won her first Grammy award for “Brown Skin Girl” from The Lion King: The Gift album. The video also secures WizKid’s first Grammy win as he appeared alongside Blue Ivy and Beyonce.

Blue Ivy is the second-youngest award-winner in Grammy history at nine-years-old.

Also during the night, Beyonce became the vocalist with the highest Grammy wins of all-time and JAY-Z’s win pushed him as the rapper with the most wins.

Congrats to The Carters.