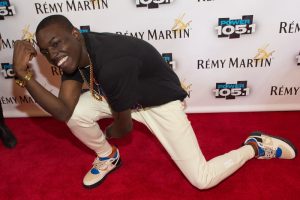 Bobby Shmurda was in the giving spirit for his first Father’s Day out of the slammer.

The Brooklyn rapper hosted the “Father’s Day Give Back Brunch” which served 200 underserved families with meals and free haircuts.

Bobby and his crew treated The Win Shelter to some home cooked Caribbean food, and three barbers joined the rapper in an effort to make the fathers “feel their best” for the holiday.

Bobby also gave away gaming consoles, board games, action figures, fooftballs, jump ropes, costumes and more to the kids. On the other hand, the fathers received clothes and books.

No food was wasted. Leftovers went to CAMBA Men’s Shelter in Brooklyn.

Although Bobby Shmurda isn’t a father yet, it didn’t stop him from celebrating Father’s Day.

Bobby and Rowdy Rebel has both been giving back to their community since their release, but the Hip Hop community is waiting for Bobby’s first musical effort since his long-awaited release.

Fans will get to see him live at Made In America and at Rolling Loud New York and Miami.

The post Bobby Shmurda Gives Free Meals and Haircuts To Underserved Families In Celebration of Father’s Day appeared first on The Source.