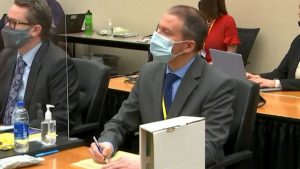 Former Minneapolis Police officer Derek Chauvin has been convicted on all charges in the killing of George Floyd in Hennepin County court. His bail was revoked and he is placed in the custody of Hennepin County sheriff.

The maximum sentence of the second-degree unintentional murder is 40 years, third-degree murder is 25 years and second degree manslaugher is 10 years and/or $20,000.

This story is updating.

The post Breaking: Derek Chauvin Found Guilty on All Charges in the Killing of George Floyd appeared first on The Source.