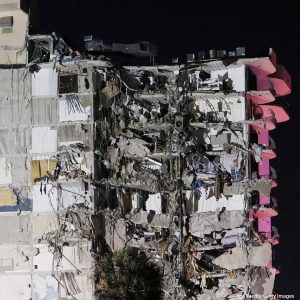 At least one person is dead and 10 are injured after an apartment building partially collapsed in Surfside, Florida, six miles away from Miami Beach.

More than 80 rescue units are currently on the scene in an attempt to rescue people from the 55 units that collapsed of a 136 unit building, which was 12 stories high. So far 35 people have been recovered.

Surfside Mayor Charles Burkett stated there is currently no reason for the collapse, however, there is concern the rest of the building could collapse during the rescue effort.

Resident Barry Cohen told CNN after he heard the collapse he began to evacuate his home in the same building, he looked down the hall, and “there was nothing there.”

“It was just a pile of dust and rubble and paint falling from the ceilings,” he told CNN.

“There is no reason for this building to go down like this unless someone literally pulls out the supports from underneath, or they get washed out, or there is a sinkhole, or something like that because it just went down,” Burkett told CNN affiliate WSVN.

The post BREAKING: Rescue Efforts Underway After Half of Miami-area Apartment Building Collapses appeared first on The Source.