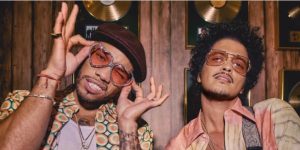 Anderson .Paak can add No. 1 single to his list of accomplishments after his “Leave the Door Open” collaboration with Bruno Mars as Silk Sonic has climbed to the top of the Billboard mountain.

The single also sits atop the Billboard Hip-Hop and R&B chart. Last week the single was No. 3 on the Hot 100. The single is also the eighth chart-topper for Mars, tying Drake, Katy Perry, and Rihanna for the most since 2010.

“Leave the Door Open” streams rose 13% this week coming in at over 21.5 million with an additional 28,600 copies sold via downloads and CDs. The song attracted 59.1 million radio airplay audience impressions (up 9%) in the week ending April 11.

The post Bruno Mars and Anderson .Paak’s “Leave the Door Open” Hits No. 1 appeared first on The Source.