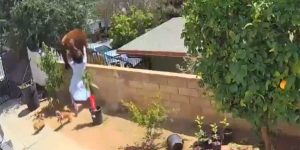 They say you never really know what your capable of until put in a situation where you have no choice. 17-year-old Hailey Morinico may have never thought she would be able to fight off a bear, but a viral video circulating the media shows otherwise. The California teenager managed to push a bear off of her fence after realizing that the bear was fighting with her dogs.

Since the video surfaced, not only has Morinico been viewed as a hero, but she has also been in almost every meme across social media since. Mystikal fans added the audio clip of the rapper’s classic “Help the Bear” freestyle.

While Morinico was able to save her dogs and herself, in a conversation with ABC7 Los Angeles, she tells us exactly what was on her mind during the encounter that left her with only a sprained finger and scrapes on her knees.

“Honestly, I did not know it was a bear,” she stated. “Until right after I pushed it, I didn’t register in my head that it was a bear. I was like ‘It’s an animal, and it’s taking my child.’”

“I pushed the bear and I was like ‘Oh my god, I just pushed a bear!’ I didn’t want to know what would happen if the bear hurt her or even took her, so I had to do what I had to do,” she added.

We know who best dog owner of the year award goes to! Do you think you could have fended your pet from a bear? Check out the clip below.

The post California Teen Who Pushed Bear to Save Dogs Speaks Out appeared first on The Source.