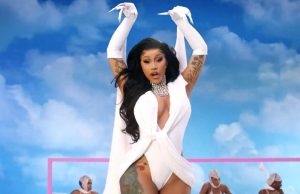 Could you imagine if Cardi B had a face tattoo? She is surely glad that she made a wise decision by not getting it. The 28-year-old superstar hit Twitter and revealed how pleased she was by not making that decision.

“Everyday I’m thankful at the fact that [I] ain’t get this face tatt I wanted when I was 16,” Cardi shared on Instagram.

She would also reveal that the tattoo was going to be “little stars from the top of my eyebrow swirling down to my jaw.”

Late last month, Migos hit the stage at the BET Awards and performed “Straightenin’” before moving into “Type Shit,” making way for Cardi B to appear and reveal that she is pregnant with her second child with Offset.

The superstar rapper hit the stage and revealed her baby bump in a see-thru jumpsuit. The performance followed a formal announcement on Twitter where both stars shared a picture of a pregnant Bardi.

The post Cardi B is Happy She Did Not Receive a Face Tattoo Earlier in Life appeared first on The Source.