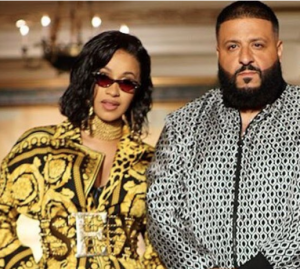 At the start of the week, DJ Khaled revealed the track list to his 12th studio album, Khaled Khaled which arrived on Friday, April 30th. The album includes appearances from Hip Hop heavyweights such as Jay-z, Nas, Lil Wayne, Drake, Megan Thee Stallion, Lil Baby, and Lil Durk among others.

Just when Khaled thought the track list to his album was complete, he revealed to his fans that there may be one more submission to top it off, bringing the album to 14 tracks total.

The last addition to the album came from the Bronx lyricist, Cardi B. On the single “Big Paper,” fans get a nostalgic Cardi B that was previously presented to the public back in her mixtape days. Shortly after the song released, Cardi B went on her Instagram live to share how the single came about.

“I didn’t think I was gonna make the record,” she stated. “I got the beat before yesterday and yes, I wrote the record!”

Cardi then shared that she wanted to make sure that she would be happy with the mix before submitting the track to be mastered and that she’s been insecure about her accent lately, but that didn’t stop her from submitting the completed track to the mega-producer by 7 AM.

Check out Khaled Khaled and let us know what you think!

The post Cardi B Wrote ‘Big Paper’ for DJ Khaled in 48 Hours appeared first on The Source.