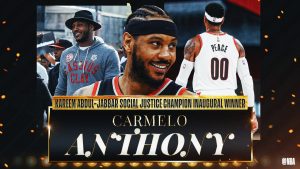 Melo was picked out of a group of five finalists for his pursuit of social justice and advancing Abdul-Jabbar’s life mission to engage, empower and drive equality for individuals and groups who have been historically marginalized or systemically disadvantaged.

In July 2020, Melo partnered with 11-time NBA All-Star Chris Paul of the Phoenix Suns and NBA legend Dwyane Wade to create the Social Change Fund, which aims to address social and economic justice issues facing Black communities and break down the discriminatory barriers to success. Through the fund, Anthony is focused on critical issues including championing criminal justice reform and inclusion, advocating for the human rights of all Black lives, expanding access to voting and civic engagement, increasing Black representation in government, and building economic equity in communities of color through investment in education, employment, wages, and housing. Last summer, he also served as guest editor-in-chief for SLAM magazine’s special Social Justice issue that featured the game’s most influential activists, including Abdul-Jabbar, Bill Russell and Sheryl Swoopes. All proceeds were donated through the Social Change Fund to support organizations working on critical issues impacting the Black community.

You can learn more about the prestigious award and Melo’s effort to the community here.