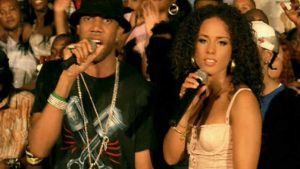 Cham is a well-known reggae artist but Hip Hop fans may recognize him from his collaboration with Alicia Keys “Ghetto Story.”

Keys is not the type of artist to join forces with just anybody so this was a major deal when the song was released in 2006.

The host asked if the singer’s label was actually trying to prevent her from fully committing to the collaboration or if those were just rumors.

“You kinda hear stuff like labels weren’t pushing for her to shoot and she was the one who said nope, I’m going to do it in Jamaica. If you notice, even the Sean Paul and Beyonce. They were never in the same space together, never performed it together. You realize there’s a lot of politics in the music industry and she kinda broke down those politics with our collaboration.”

His song with Alicia Keys was the first time Cham faced “politics” when collaborating with a mainstream artist in the American market.

Cham shared that Def Jam didn’t even want to release Foxy Brown’s “Tables Will Turn” as a single, but she “paved the way for that Caribbean connection in Hip Hop.”

“That whole Caribbean infusion, she started. All of them came after her and took it to the next level where they were supposed to take it. But that connection? Inga is the one that paved the way for that Caribbean connection with the Hip Hop world and we have to give credit to Inga,” he said during the conversation.