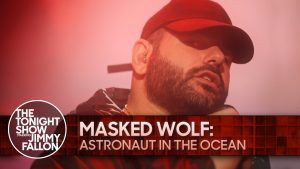 Produced and co-written by the talented and multi-platinum Tyron Hapi, collectively the catchy two-minute plus single has almost amassed a combined additional near 100 million YouTube views too since it originally dropped as audio-only in June 2019 on Teamwrk Records and re-released by ADA/ Warner’s Music Elektra Records in early January this year. The re-release by Elektra spawned even more life to the already hugely successful hit single, going number 1 across the world and charting significantly in-between. Watch the below film clip by Cerne Studios and 180 Creative that dropped in late October last year to the viral hit that really took the song to a new deep stratosphere.

Masked Wolf’s “Astronaut In The Ocean” single is also currently not only the world number 1 Shazamed hip hop track but also overall No. 2 too across all genres for the last three weeks with over 4.2 million Shazam’s this week alone. An increasingly warm burning single which only seems to be growing an extra pair of legs by the week, “Astronaut In The Ocean” has been the number 1 Hip-Hop/Rap song on Shazam for the last three months and viral-like no one else recently on Tik Tok too. Masked Wolf recently sat down with Genius and broke down the deep, heartfelt lyrics on his hit single – watch below.

Citing key and diverse rap influences including 50 Cent, Eminem, Kevin Gates, Drake, and Hopsin, Masked Wolf released his major debut single back in mid-December 2018 “Speed Racer” to immediate critical acclaim generating a local groundswell buzz organically for the Sydney, Australia rapper. Currently touring Australia on the recently reopened music festival circuit, we can expect a global tour as soon as travel restrictions ease. Holding down a full-time day job as well until just weeks ago, the buzz around the single has transformed Masked Wolf into one of the main hip hop artists to watch for 2021, and expect a string of massive collaboration singles dropping from him soon. Closing in on a Billion streams already, it’s officially the year his Wolfpack is taking over.

The post Chart-Topping Rapper Masked Wolf Appears On The Tonight Show With Jimmy Fallon appeared first on The Source.