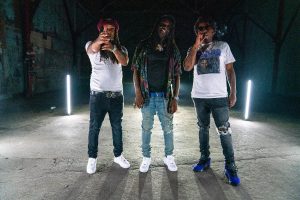 Chief Keef aka The Godfather of the Drill is teaming up with longtime friends and collaborators Tadoe and Ballout to create the new Drill supergroup, Glo Gang.

The trio have released a new single “On Gang,” which is featured by Young Malcom.

It is good to see Keef back to the music following a brief hospital stint. Sosa didn’t reveal the reason behind the hospitalization, but now everything seems to be on the up and up.