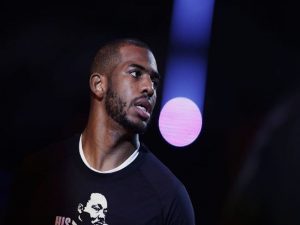 In the middle of the greatest playoff run of his career and primed to make the NBA Finals, Phoenix Suns point guard Chris Paul has been entered into the NBA’s health and safety protocol.

Shams Charania of The Athletic reports Paul’s status is up in the air for the start of the Western Conference Finals. Currently, their opponent in the Los Angeles Clippers or Utah Jazz is battling for position in the SemiFinals. If there happens to be a need for a Game 7 it would be played on Sunday.

There is a possibility for a shorter isolated period if Chris Paul is vaccinated.

During the playoffs, Chris Paul is averaging 15.7 points, 8.7 assists, and 4.1 rebounds while serving as the heart and soul for the Suns team.