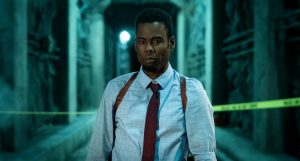 Are you going to watch Spiral starring Chris Rock and Samuel L. Jackson?

Chris Rock and Samuel L. Jackson are set to star in the standalone sequel, Spiral, which is the ninth installment of the Saw franchise.

During a virtual press junket, the comedian was asked what motivated him to reprise the 20-year old franchise. “I’ve watched most of them,” he said. “I was talking to the head of Lionsgate and I mentioned it to them and he thought it was a good idea.”

Rock portrays Detective Zeke Banks, who is a good cop in a corrupted police department which was lead by his on-screen father, portrayed by Jackson.

When asked about his experience working alongside the Pulp Fiction actor, Chris Rock said, “I love Sam. I look up to him. There [are] scenes I wish I can shoot over because I was in such awe of him and I don’t know if I gave my best performance.”

Rock and Jackson are both veterans in the game and were relieved to find something “new to do” with their roles in the upcoming thriller which is slated to be released in theaters on Thursday, May 13th.

Check out the full interview with Chris Rock for the movie Spiral in its entirety below:

The post Chris Rock Says He Was ‘In Awe’ While Working With Samuel L. Jackson in ‘Spiral’ appeared first on The Source.