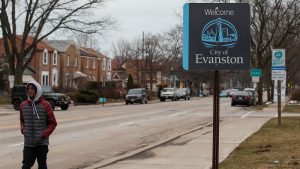 This week, Evanston, Ill, a suburb that borders Chicago, has approved and began to disburse reparations to Black residents who can be associated with ramifications of slavery and segregation.

“Right now the whole world is looking at Evanston,” Ron Daniels, president of the National African American Reparations Commission, said to Yahoo on Monday. “This is a moment like none other that we’ve ever seen, and it’s a good moment.”

The vote for reparations passed at an 8-1 vote, approving a 10-year, $10 million commitment with the aim of righting the practices of housing discrimination between 1919 and 1969. The first installment of $400,000 will be given in $25,000 allotments that can be used for home improvements or mortgage assistance.

To qualify for the payment, residents would have had to live in the suburb during the years of the plan or descendants of someone who did. Evanston currently has 12,000 Black residents of a total population of 75,000.

The post City of Evanston Issues Reparations to Black Residents Over Past Discrimination appeared first on The Source.