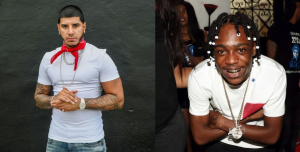 CJ and 22gz had a tumultuous relationship ever since the Brooklyn drill rapper compared the “Whoopty” rapper to Tekashi 6ix9ine and released the diss track, “Goofy.”

Both artists traded words online but things seemed to die down since then.

CJ did an interview with Two Bees TV at the 2021 BET Awards red carpet and asked the Staten Island native about the lack of unity in the New York drill movement.

“We have to change the narrative and kind of just you know start working together,” he responded.

The host, Miss2Bees asked CJ if he would collaborate with his former foe, 22gz to which he said, “I feel like we got to sit down and have that conversation you know as men first. But I never met him. I don’t really know him like that, you know. I don’t really know the situation but I am looking to working with whoever.”

22gz hasn’t publicly responded but he did acknowledge the clip. Would you be here for a collaboration between the two drill artists?

Check out the interview in its entirety below:

22 released “Goofy” as a “g-check” to CJ who he says is capitalizing from the movement without actually being part of the lifestyle, as per his interview with All Hip Hop.

“I just want people to know what the truth is, we gon keep it 100,” 22Gz said. “Especially this drill rap, there’s a lot of rappers in this category who been through some real s***, so we ain’t just gonna have somebody come [and] make this whole s*** some flawed, fake s***,” he said.

Later in the interview, the “Suburban” rapper said that he wouldn’t have came at CJ if he “tapped in.”

“I didn’t even say that to really expose boy, but it’s like hey if he can lie about that, why wouldn’t ya’ll think he’d take my whole s*** and run with it?” he continued. “I wouldn’t even mind. I just wanted the credit for my s*** because I done gave sauce to damn near everybody in the city and nobody tapped in. Even the opps use my s*** — all the lingo you see, all the dancing, that’s mine.”

CJ didn’t back down although he initially tried to brush the negativity off during an interview with Ebro Darden on Apple Music.

“I will really beat the shit out of one of y’all n-ggas, no cap,” the rapper said in the video. “And I don’t really like doing this because we all from the town, we all from New York, you know what I’m sayin’? But, at the end of the day, them n-ggas mentioned my name first. So, when I make my little songs and I make my little comments and shit, it’s a problem, right?”

He continued, “Listen, them n-ggas could both suck my dick, respectfully, and I’ll say it again, and I’mma keep saying it. Y’all n-ggas can’t stand a chance against me.”

22 Gz responded posting a series of photos wearing a red sniper gang hoodie quoting his own lyrics. “HOW THE FUCK YOU SCREAMING WHOOPTY

But it looks like CJ is ready to take a step towards positivity and put things behind him.

The post CJ Is Open To Burying The Hatchet and Collaborating With 22gz appeared first on The Source.