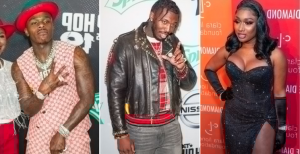 An argument between Pardison Fountaine and DaBaby ensued after DaBaby retweeted a fan’s tweet the insinuated that DaBaby and Tory Lanez were cool again. This, of course, would never sit right with Pardi, who is now Megan’s new boo.

DaBaby insists he didn’t send out the tweet, but neither Meg or Pardi was buying his excuse.

Read the entire exchange between all three parties below.

The post DaBaby And Meg Thee Stallion’s BF Get Into Argument On Twitter appeared first on The Source.