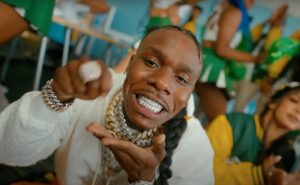 DaBaby and JAY-Z on one record? One of the hottest in the game is chasing down a collaboration with the greatest of all time.

DaBaby hit Twitter and revealed that he is interested in getting Hov on a song. The rapper tweeted out the request: “Who I gotta talk to to get Jay-Z on a song?”

Ironically, fans pointed toward Megan Thee Stallion, with who DaBaby was once friends but had a heated conversation on Twitter.

The HOV collaboration hasn’t come yet, however, DaBaby is still hard at work. Shortly after releasing his “Ball If I Want To” single, he comes back with another one in “Red Light Green Light.” Baby’s trademark of hopping dead on the beat continues, while he raps across a flute-laden beat.

DaBaby can also be seen in the video for Polo G’s “Party Life.” The song is from Polo G’s new album Hall of Fame. The song comes with a video for “RAPSTAR,” which is directed by ARRAD. The duo makes sure to get it in and enjoy the fruits of their labor in a non-stop party that kicks off in the day and stretches deep into the night.

You can watch that video here.

The post DaBaby is Hoping to Land a JAY-Z Collaboration appeared first on The Source.