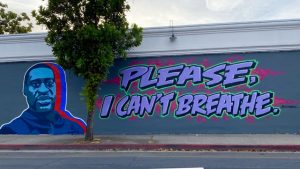 Adult film star Dakota Skye, real name Lauren Scott passed away weeks after posing topless in front of a George Floyd mural. According to sources, Scott was found dead in a motorhome near LA. While the cause of death has yet to be revealed, the family of Scott reports that the adult actress has serious substance abuse issues, regarding alcohol and fentanyl.

The 27 year old’s aunt, Linda Arden spoke to the U.S. Sun in regards to her niece. “Her real-life story, and how she came to be in that industry, has truly been a tragedy. She died almost exactly two years after her mother, my baby sister’s, death which was caused by addiction and alcoholism,” she stated. “Lauren was a product of a highly dysfunctional family involving drugs, alcohol, physical, emotional, verbal and sexual abuse.”

Just last month, Scott found herself in the hot seat after posing topless near a George Floyd mural in Santa Barbara. “Happy #GeorgeFloyd day in #santabarbara <3 #dakotaskye equality & fair treatment for all. Dope mural.” While most found the post insensitive, and offensive, shameful Scott explained that people were misinterpreting her intentions behind the post. “I’m celebrating BAD cops being checked with abusing their authority against human beings .. hello. No human being should die getting arrested,” she responded.

Scott’s aunt, Linda Arden says she is happy that her niece may have found peace. “She no longer has to walk through this world in pain in her own prison and that gives me comfort to know she no longer has to fight the voices and images that haunted her.” Rest in Peace.

Our thoughts and prayers go out to the family and friends of Dakota Skye.

The post Dakota Skye Dies Weeks After Posing Topless in Front of George Floyd Mural appeared first on The Source.