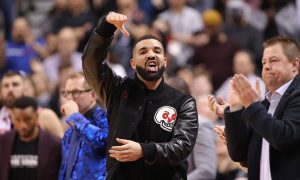 Did Dana White just spoil some plans of The Boy? In a press conference hyping the return of Conor McGregor to the Octagon, Rogan reveals that Drake has big plans in Vegas.

“Rogan and Chappelle Thursday and Friday night at the MGM Grand, Bieber’s performing this weekend, Drake’s doing something this weekend,” White continued. “The list just goes on and on. I could be here for an hour telling you who’s doing what.”

So White, what exactly is Drake doing? Inquiring minds would love to know.

With Certified Lover Boy pending release, Drake fans are on high alert. Giving the latest tease to fans, Drake changed his Instagram bio to simply read “Certified” sending the net into a frenzy of anticipation.

If the Instagram bio change and the promise to drop before the end of the summer don’t throw gas on the Certified Lover Boy fire, maybe filming a new video with Future will perk your eyes at Drake. The “Life is Good” tandem is reportedly appearing to gear up for another classic record in their run of release and the video is reportedly for a single from CLB.

The post Dana White Hints at Big Plans for Drake in Vegas This Weekend appeared first on The Source.