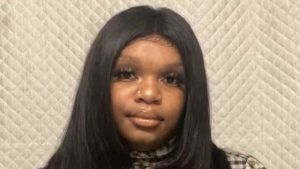 While the widespread video of George Floyd’s murder ignited a movement and aided in the conviction of Derek Chauvin, it changed the life of the young lady who recorded it forever. Darnella Frazier was just 17-years-old when a trip to a corner store with her younger cousin turned into witnessing an arrest that turned deadly. In her testimony during the murder trial of Chauvin, she described what she saw.

Exactly one year ago, a video showing Floyd’s death left the world in shock. The footage recorded May 25, 2020, showed the 46-year-old Black man, pleading for his life as former Minneapolis police officer Derek Chauvin kneeled on his neck for exactly 9 minutes 29 seconds, leading to his death. For many, this video showed the dangerous reality of racism and police brutality, later sparking global outrage and ongoing protests

Like many people who saw the video, Darnella was deeply affected. The difference is she saw it firsthand. According to the teenager, the tragedy took a toll on her mental health. “Behind this smile, behind these awards, behind the publicity, I’m a girl trying to heal from something I am reminded of every day. Everyone talks about the girl who recorded George Floyd’s death, but to actually be her is a different story. Not only did this affect me, my family too. We all experienced change. My mom the most.” said Frazier.

Though the young woman rarely speaks publicly about that day, she described how the past year has been for her and her family in a public Facebook post.

“I am 18 now and I still hold the weight and trauma of what I witnessed a year ago. It’s a little easier now, but I’m not who I used to be. A part of my childhood was taken from me. My 9-year-old cousin who witnessed the same thing I did got a part of her childhood taken from her.” wrote Frazier on the anniversary of Floyd’s death.

According to Darnella, they were forced to leave their home, due to safety concerns. She also had to deal with constantly being asked by reporters to relive that day and the constant image of seeing Floyd’s lifeless body in her head.

“I couldn’t sleep properly for weeks. I used to shake so bad at night my mom had to rock me to sleep. Hopping from hotel to hotel because we didn’t have a home and looking over our back every day in the process. Having panic and anxiety attacks every time I seen a police car, not knowing who to trust because a lot of people are evil with bad intentions. I hold that weight.” wrote Darnella Frazier.

Although she still carries the weight of witnessing Floyd’s last moments, Frazier said she understands that what she did was powerful.

“Even though this was a traumatic life-changing experience for me, I’m proud of myself. If it weren’t for my video, the world wouldn’t have known the truth. I own that.” wrote the 18-year-old.

The bravery and mental toll filming this devastating moment took on Frazier’s doesn’t go unnoticed by the community. Most recently the teen was awarded a Pulitzer Prize for her bravery. In addition to this, ESPN+ & The Undefeated are presenting a 30-minute show dedicated to honoring and highlighting the courageous teenager’s story. According to the sports media company, viewers will get a look through the eyes of Darnella’s community and people around the country, including the sports world impacted by her video. The themes of Bearing Witness: A Portrait of Darnella Frazier will include the everyday acts of bravery that have always been the engine of Black progress, the unsung role of Black women in the struggle for full equality, and the trauma that results from witnessing acts of police violence.

This tribute was created by The Undefeated, ESPN’s content initiative exploring the intersections of sports, race, and culture. According to the Editor-in-Chief of The Undefeated, Raina Kelley, they are committed to supporting the Black sports community in all aspects.  “This initiative will highlight moments and stories on and off the field that empower and inspire; moments of athletic heroism and moral heroism; moments that signify change and progress, and moments that show us how much work is still to be done. We want to show Black fans that we are always there for them, we represent and reflect them, and we celebrate and appreciate them,” said Kelley.

According to the Washington Post, “athletes in nearly every sport — and at every level — have used their platforms to protest police violence since Floyd’s murder. And in doing so, they have pushed their respective leagues and franchises to join their efforts for social justice — something that has not traditionally happened.” In every corner of sports, athletes have long been some of the most vocal and expressive leaders at the forefront of society’s change.

This post is a sponsored partnership with ESPN+. For more stories around mental health in sports, visit the Black History Always collection on The U on ESPN+