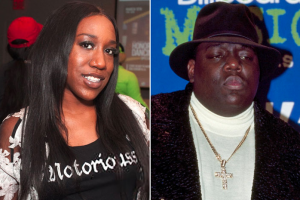 New York transplants in Los Angeles have often said that the only thing that they miss from home is pizza. Now the daughters of two late Hip Hop legends are set to solve that problem.

Tyra Myricks and T’Yanna Wallace have joined forces to bring “Juicy Pizza”, to L.A., which is named after T’Yanna’s father’s 1994 smash single. Myricks came up with the idea for the NY-style pizza joint, but she had to bring Wallace on board in order to bring that Brooklyn flavor to their pizzaria.

The secret ingredient? New York tap water in the pizza dough. No, really.

Also, pizza, will have a cannabis consumption lounge in the back of the restaurant, which they anticipate will turn into a swanky, Hollywood hotspot.

Juicy Pizza is set to open its doors this Saturday night for dinner.

The post Daughters Of Jam Master Jay And Notorious B.I.G. Team Up To Bring NYC Pizza To L.A. appeared first on The Source.