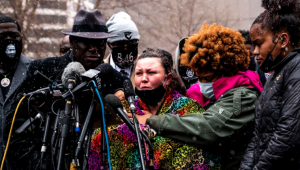 Following the shooting death of 20-year-old Daunte Wright in Brooklyn Center, Minnesota, the protests in Minneapolis during the Derek Chauvin trial intensified, which now, according to reports, have brought on racist phone calls and even death threats to the family to the Wright family.

The Wright’s attorney, Thomas Bowers, stated, “There have been some threats to the family, which is disturbing.” Bowers also stated that he’s received racist emails and phone calls saying that they were happy that the 20-year-old was killed.

This comes after the release of the photo of Kim Potter, the former Brooklyn Center officer who resigned days after shooting and killing Wright. Potter is currently facing second degree murder charges in Wright’s death.