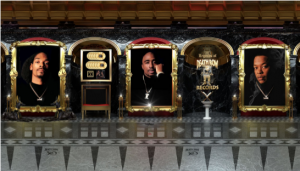 Death Row Records has launched the ‘Death Row Experience’ today, a virtual retrospective gallery that celebrates the 30th anniversary of the iconic label this year. The Los Angeles based company now owned by EntertainmentOne (eOne), catapulted gangster rap into mainstream consciousness and cultivated hip-hop culture that continues to influence artists today. The virtual experience was created by Flux88 Studios in partnership with TillaVision and is open to the public for all to enjoy. TillaVision is a digital designer and renowned crypto artist who has worked with Pop Smoke, Nas, Cardi B, DJ Khaled, JuiceWRLD, and Swae Lee to name a few.

Death Row Records was formed in 1991 and were the pioneers in changing the course of music. The combination of larger-than-life artists and groundbreaking production helmed Death Row Records. The label stands as one the most successful stories in music history with over $36.5m albums sold worldwide and record breaking RIAA certified albums that include 2Pac’s All Eyez on Me reaching 10x platinum plus, Until the End of Time and Don Killuminati albums reaching 4x platinum with Better Dayz at 3x platinum, Snoop Dogg’s, Doggstyle reaching 4x platinum with The Doggfather reaching 2x platinum with many similar and notable accolades.

The hip-hop giant once owned and operated by Dr. Dre and Marion “Suge” Knight were instrumental in revolutionizing rap music that maintains relevance to this day. As the music industry shifted into the digital era, Death Row’s catalog garnered more than 5 billion+ streams.
The exhibit includes the story of the label’s rise plus their legendary artists and albums, including 30 easter eggs to celebrate 30 years of history and NFTs (created by TillaVision) not to be missed. Fans will be able find rare collectables that link out to liner notes, medallions that redirect to NFT’s, three pagers with real phone numbers and more fun activations. In addition, fans are encouraged to participate in the virtual museum by uploading their own photos and videos to commemorate the anniversary of their favorite Death Row artists from concert photos, videos, old ticket stubs and anything else. Fans can submit their content when visiting the virtual museum entrance page. The fan exhibit will be open on June 30.

Visit the free gallery and gift shop for exclusive items.