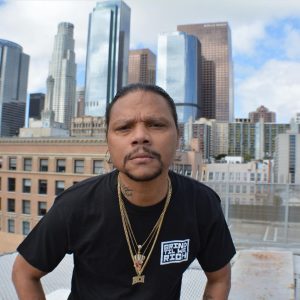 De’Aundre Bonds plays Skully on the popular crime drama series Snowfall. But if you’re older you might know him as Stacey from The Wood, who later reappeared in the 2015 film Dope.

Skully instantly became a fan-favorite and Bonds is grateful for the role which he describes as a second opportunity granted to him by the late John Singleton.

The veteran actor spoke about his relationship with the iconic filmmaker in an exclusive Zoom conversation with The Source.

De’Aundre Bonds also described his experience filming the fourth season during the ongoing COVID-19 pandemic and revealed that Skully’s character is based on a real person that Singleton knew.

Snowfall received an early season five renewal following a 41% viewership increase and De’Aundre Bonds is just getting heated up in season four.

Check out the interview below:

(This interview was edited and condensed for clarity).

How’s the pandemic treating you? I have to ask before we get into all the questions.

Uh, it’s robbing me. It is robbing me you know, but at the same time, it’s making me a better person because you know, what I benefit from going through it is the knowledge and the experience of going through some real sh*t, you know what I mean? I just applied myself.

Definitely. This quarantine has been eye-opening in more ways than one, especially for most. So I feel you on that one. I know it took a whole year to film snowfall because of it. How was that experience filming during the pandemic?

It just abruptly stopped. It was like, we going we one show, two shows, three shows and then cut. And it was my birthday too. I was supposed to film March 19th on my birthday last year. And, um, all that was over for like seven months. So it was like, it stopped. I need that, you know, I’m trying to get the bag but you know, it, it all worked itself out well and you know, still got what I deserve, you know, until I get more. I actually had COVID.

Hell yeah. I beat everything, ain’t nothing going to stop me. I had to just, just quarantine myself for like two weeks. And during that time that’s when it happened, it was like, it all came and, you know, I had some symptoms. I didn’t lose my taste, I didn’t lose my smell, but I was weak. I wanted to just sleep and I had like lower back pains. So once I did that, got over that it took about 10 days, 12 days. But just listening to the directions of the doctor. Stay your ass in quarantine. Don’t let nobody come around you, don’t go around nobody. And my friends, you know, they’ll pull up and drop stuff like breakfast and leave it outside and I’ll pick it up after that. You know what I mean? That’s how I did it.

Yeah. I’m in New York in the epicenter. And I do understand that a lot of people are not taking this seriously, but I definitely am.

I am as well. I keep a whole stash of [masks]. I took mine off. And it made me a little paranoid as far as I don’t want to be around nobody, even if we’re close. We got to have masks on period. That’s hard to do, however, it’s important and it’s for all of our health and safety. A lot of people immune system is not equipped to handle that. And it’s a lot of people that passed because of other people being careless. And I don’t want to be a person to cause somebody to, you know, get sick or me getting sick. You know what I mean? I take it serious. Like, when AIDS came out I always wore condoms for protection. I wore all them motherfuckers. Thank God. I never got it.

Now you got to wear condoms and masks to protect ourselves.

Real life. And, or, you know, even with your family, I don’t wear a condom no more because I got a wife and I got children, and I’m trying to make more. However, you just gotta be loyal and dedicated to who it is you choose. Cause ultimately it’s, they pick and your choice.

Exactly. So I love that Skully’s character was centralized this season. Like that was the highlight of like the second episode when he was looking for the roaches. Everyone kept talking about that. How was filming the shootout scene?

Well, I actually didn’t understand it at the time, you know, because I don’t see no roaches, but it was like, he tripping like the character was off some drugs and he tuned in on the third eye. You know, drugs open up portals and you get to see and feel stuff you may not have. You know what I mean? I think that’s what brought it out. I didn’t know. I just did it. I was like ‘Roaches? Roaches?’ And now I think it was the people in there that was the roaches, Franklin and all his boys and Manboy, all them roaches. And it worked out because it may one of their goons come out and shoot me before it was time. They probably would’ve had us, but they fucked up.

So I do think that Skully will be the standout character this season. And I wonder if that was John Singleton’s vision?

Well, I could say this John’s vision is coming to pass in a way that he meant it to come to pass. And he really knew a brother. That’s a real character, Skully, and John knew him and he told me he how he wanted him before he passed. And, um, I take that into consideration. Cause you know, Skully was a wild person, but he ran a lot of things. He was he was about his business and he wasn’t no joke, you know? And John told me that, um, with that knowledge that he shared with me, I’m just gonna, you know, do my, my greatest, you know what I mean, to make my brother proud and you know, to let the world know, that he knows what he’s doing and everything he touches turn platinum.

Facts. When I interviewed Damson Idris, I learned that John Singleton was very hands-on in every department on set and Damson said that [John] left the code for you guys to carry on the show. Would you agree with that?

I know that’s a fact because the way that he was hands-on, you know, he, he incorporated us, me specifically. And we had breakfast in my trailer and I was like, what? John coming in here to kick it with me. Like, come on, man. He was so humble and great. And he really told you what he expected and the reason he hired you. ‘Look, I need this. I want you do this.’ That dance when I was in episode three, that was John he’s like, ‘I want you to do some type of dance,’ and he was trying to show me in another way, but it worked out. I couldn’t do the way he would, but it worked. You know what I mean? The eardrops, that was John! He was like, ‘Man, I want you to be wild.’ I hope I’m fulfilling that. We done with the season, So it’s like, man, all we have to do is wait for the check now. The first two checks was episode one and two, everybody responded, with likes, love, and respect. And I can’t wait for the rest of it.

The season premiere prompted people to start giving you your flowers because you’ve been putting in work for a really long time. And I want to know what is the biggest career lesson that you’ve learned so far?

Whenever I think of LA movies, I think of you because you starred in The Wood, Dope, and now Snowfall. Do you intentionally choose these roles?

I intentionally try to do whatever God blessed with to the best of my ability. I don’t choose them. You know, I want to be a husband, father, a doctor, a lawyer. I want to do all that. And in time it’ll come to pass. You know what I mean? Because I want to do it, and I know that. However, in the same token, I’m going to take what I’m blessed with and magnify and put my stamp on it.

As you should. It’s always a shocker. When we find out like a British actor is not from here when they play a certain role really well and Damson said that he got praise from some LA natives for his portrayal of Franklin Saint. Do you agree that he portrays an authentic LA native?

I do. I’m not just saying this because it’s my bro and we’re working together. I’m saying this as him being a British native and coming out here and embodying the LA character without the accent. Cause you know, that’s hard if I was just trying to be British, come on. That will be crazy. But he’s pulling that off like he is from LA, like he was born out here. Shout outs to Dub C, he’s been helping him to conjure that energy without the accent. So we got help. You gotta have help. So he got one of the greatest LA natives out here with him and they’re pulling it off.

So you have a very long working relationship with the late and great John Singleton. What is your fondest memory of the iconic filmmaker?

Well, you know what, just the pleasure and the love and respect of him even knowing me and the way he introduced himself. It was like, ‘Man, I got something for you.’ Real life, that’s coming out later though. But he was humble. He was humble. He was excited. And just him touching me after the stuff that I’ve been through. You know what I mean? Him giving me another opportunity, you know. A lot of people that I worked with, you know, and sacrificed my energy, my talent, myself, they have not reached out to me. You know what I mean? As far as when I was in prison or since I’ve been out and that’s respectful. But that’s what I love about him. He don’t hold nothing against you, Even with Pac, Tupac. He knew Pac had that. He knew! He looked and said ‘I’m going to transform you in Poetic Justice. You’re going to be a menace in this one.’ You know, but he stuck with me and he see it in us. Regina King, Oh my God, undoubtedly I think Regina King is going to be the next John Singleton. She’s on her sh*t and John was the catupult, he saw that in her. He knew what he wanted. He knew how to bring it out to people. And it’s legendary. Now that it’s done.

The post De’Aundre Bonds Talks John Singleton Giving Him a Second Chance With ‘Snowfall’ and Beating COVID-19 appeared first on The Source.