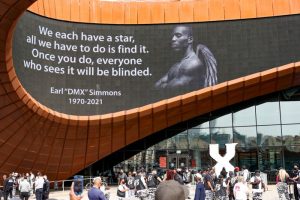 DMX’s funeral was fit for a King.

The late rapper served as the lifeline of Def Jam for many years so it was only right that the record label sent him home in style.

TMZ reported that Def Jam covered the transfer of DMX’s remains to the funeral home, embalming, the customized red casket, plus the hearse and flowers.

There’s no mention of the monster truck that rode down Flatbush Avenue on the way to the Barclays Center.

In total, Def Jam paid $35,228.13 as per the probate documents obtained by the tabloid.

His family and friends delivered emotional eulogies including the original Ruff Ryders, Nas, and Kanye West, who hosted a Sunday Service in honor of the Yonkers rapper.

The beloved emcee passed away at the age of 50 following a fatal drug overdose.