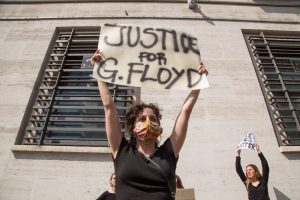 Convicted murder, Derek Chauvin, is close to finalizing a plea deal on the federal charges he faces.

According to WCOO, a local Minnesota news outlet, the deal would require Chauvin, the former Minnesota police officer who was sentenced to 22.5 years for murdering George Floyd, to publicly speak on Floyd’s death for the first time.

The deal would ensure that Chauvin would spend his time in federal prison rather than state prison. It was also reported that the plea will also prevent him from getting a life sentence in another trial.

During last week’s sentencing, when the judge asked Chauvin to speak on the death of George Floyd, he made a surprising comment, saying that “he was not able to give a “formal statement due to legal matters.” However, “I give my condolences to the Floyd family. There’s going to be some other information in the future that will be of interest and I hope this will give you some peace of mind.”

That comment was a clear reference to what has now come about. If Chauvin accepts the deal, he would have to speak on why he decided to kill George Floyd.

Last week, a Minnesota judge sentenced Chauvin to 22 and a half years in prison for murdering Floyd during an arrest over a counterfeit $20 bill last May. This sentence was 10 years longer than what state sentencing guidelines recommended and was “one of the longest any police officer in the United States has received in modern times for the death of a civilian” by Minnesota Attorney General Keith Ellison.