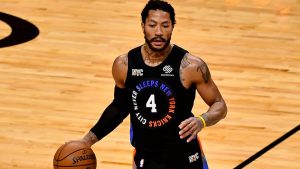 The Chicagoians are linking up for something special.

Both Kanye West and Derrick Rose are hometown legends. Both have gone on to be accomplished and accoladed in their respective fields. Back in 2012, Ye shouted out the 2011 NBA MVP in Chief Keef’s “Don’t Remix.” As we fast forward almost a decade later, the two are gearing up to make their native city proud.

While West has flooded media headlines from his recent divorce from his wife, Kim Kardashian, he continues to prepare for the release of his Gap line. Now he is adding another project to his plate. Derrick Rose took to Instagram to explain how it all went down, in addition to his admiration for West’s journey.

“Big bro team walks in and say they have to talk business,” started Rose. “Me and my Queen were about to leave the room and give them their space to talk business. He told us to not leave… G shit! His team was telling him to really think about the decision becuz it was going to be time consuming and he had a lot on his plate at that time. Next day we get on the plane to head back home and we seen that he did the GAP deal. We couldnt believe it. I been watching Ye from a far my whole life. Watched EVERY interview and move he made and loved how God, self belief and that Chicago toughness, plus that soulful touch got him through all the bullshit that was in front of him. I’m a student of Success and it’s been a blessing to watch dude.”

He continues by detailing Ye’s beginnings. From moving to Newark, NJ after being evicted from his Chicago apartment in order to be closer to New York, he created his own opportunity. This ultimately led to him playing beats for Jay-Z. After a number of product placements, an accident that changed his life, and uncanny resilience, the rest was history.

While there are no specific release dates, it is good to know that we should expect something in the future. Last year his wife, Alaina Anderson, previewed the potential collaboration.