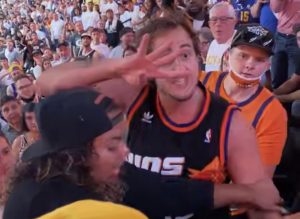 During game 3 of the Phoenix Suns series against the Denver Nuggets, a Suns fan defended himself against two Nuggets fans. After delivering some haymakers, the Suns fan screamed “Suns in 4,” detailing that his team will sweep the Nuggets.

That sweep indeed happened and now Phoenix Suns star Devin Booker is in search of the man who held down the Suns on the road.

The sweep took place on Sunday as the Suns gave a compelling and dominant win over the Nuggets 125-118. The Suns now await the winner of the Utah Jazz and Los Angeles Clippers series that is tied up and on the way back to Salt Lake City for Game 5.

The post Devin Booker is In Search of “Suns in 4” Fan Who Gave Nuggets Fans the Hands appeared first on The Source.