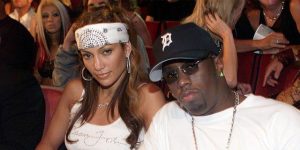 Did Diddy shoot his shot at Jennifer Lopez?

The mogul celebrated throwback Thursday this week with an old picture of him and his then-girlfriend, J. Lo hand-in-hand while he sported a velour Sean John sweatsuit.

He simply captioned the photo, “tbt.”

It could very much be just that but Diddy’s timing is impeccable because there are reports that the singer and actress is back with her other ex, Ben Affleck amid her split from Alex Rodriguez.

The couple met in 1999 while working on the lead single for her debut album, “If You Had My Love,” and sparked a romance that generated lots of press.

“Puffy and I both grew up in the Bronx,” J.Lo said told Tony Dokoupil for CBS Sunday Morning in 2019 of their initial connection. “He had been in the music business and had all this success; I was just starting and making my first album when I met him. He became kind of a mentor to me in that moment.”

But their relationship came to an end when they were arrested on a weapons charge following an incident at a New York City nightclub when Bad Boy Records artist, Shyne, shot the club up.

Jennifer Lopez spent a few hours in jail, meanwhile Diddy was charged but later acquitted. “The Puffy era was just kind of a crazy, heightened time in my life,” she said in the CBS interview. “We had this kind of crazy, tumultuous relationship that ended in a bang,” the singer continued.

Many argued that she stripped her “Jenny From The Block” moniker after she began to rise to pop super stardom.

But in a 2003 interview with VIBE, Jennifer insinuated that his infidelity also played a part in their ultimate split. I was in this relationship with Puff where I was totally crying, crazy and going nuts, and it really took my life in a whole tailspin.”

She added, “I never caught him but I just knew. He’d say he was going to a club for a couple of hours and then never come back that night,” Lopez continued. And she didn’t want that in her future. “I had to think, do I want to be home with kids in 10 years wondering where somebody is at three in the morning?”

The post Diddy Posts Throwback Picture of Him and Jennifer Lopez Amid Bennifer Reunion appeared first on The Source.