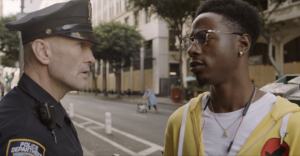 The story is centered around Carter James, portrayed by the Brooklyn rapper, who is reliving the same awful day that ends deadly.

From the looks of the trailer below, the film couldn’t have come at a better time in light of the current social climate. Two Distant Strangers will be available for streaming on April 9th.

The film was written by Travon Free and directed by Free and Martin Desmond Roe. It was produced by Lawrence Bender, Jesse Williams, and Sean “Diddy” Combs.

“When we set out to create this short in the middle of the simultaneous pandemic and social justice crises, we didn’t know what to expect. But in just five days, we pulled off the nearly impossible to make this incredible film. And all of us have been so filled with gratitude to see so many people responding to this story of resilience and perseverance,” said Free and Roe in a joint statement. “Two Distant Strangers tackles a tough subject for everyone, but in an effort to forge a new direction in the conversation. And now having Netflix come on board to bring that message to millions is an incredible opportunity.”