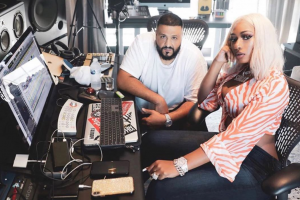 Now that the project is finally eyeing an official release on Friday (April 30th), Khaled is opening up more about the star-studded track list from which fans can expect to hear. Circling back to the track he cut with Megan, Khaled is hopeful that the song will be providing us with the same anthem vibes that came of the T-Pain-assisted “All I Do Is Win.”

“It’s one of those records where, like, after a Super Bowl win, or an NBA championship, any accomplishment,” he tells Billboard. “The last time I felt like this was ‘All I Do Is Win’ […] This is the feeling I’m getting. It is an anthem.”

He goes on to tell the publication that it’s one of those tracks that will be “licensed forever.”

In addition to Megan, Khaled Khaled will also feature verses from Roddy Ricch, Drake, Migos, H.E.R., and Bryson Tiller among others.

In particular, Lil Baby makes three total appearances across the track list while Khaled has also managed to log Jay-Z and Nas on the same select for his “Sorry Not Sorry” cut.

The post DJ Khaled Compares New Megan Thee Stallion ‘Anthem’ To ‘All I Do Is Win’ appeared first on The Source.