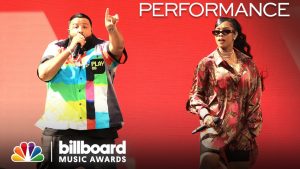 For the last month, DJ Khaled has been everywhere pushing singles from his Khaled Khaled album. Last night, during the Billboard Music Awards, Khaled hit the stage with Migos and H.E.R. to kick off the show with their single “We Going Crazy.”

Earlier this month, Khaled was called the Quincy Jones of Hip-Hop.

“People take away the greatness from Khaled,” Fat Joe said. “And they say, ‘Well he just gets a bunch of big-time rappers and puts them on the same song.’ There’s a million DJs and producers that try that. And those ain’t hit records. And it’s been a long time since we’ve heard Nas and Jay-Z on what to me sounds like a smash hit. That’s a smash hit. They can play it on the radio, it’s streaming incredibly. So, Khaled really is the Quincy Jones of hip-hop right now.”

You can read more on that here and see the performance below.

The post DJ Khaled, Migos and H.E.R. Perform “We Going Crazy” at 2021 BBMAs appeared first on The Source.