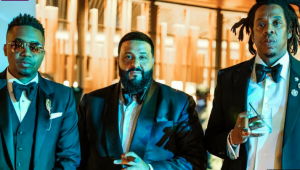 DJ Khaled pulls off the ultimate collaboration. “The album is 100% done.”

Over the past month, DJ Khaled has continued to build the anticipation for his 12th studio album. The Grammy Award winning producer has frequently given fans an inside look every time he receives the vocals for an artist feature. From Roddy Ricch to Justin Timberlake and Megan Thee Stallion, those are only a short list of artists on another highly anticipated DJ Khaled album.

Back in 2020, DJ Khaled tapped frequent collaborator, Drake, for two tracks: “Greece” and “Popstar.” When Drizzy couldn’t make the “Popstar” video shoot due to COVID-19 travel restrictions, Justin Bieber stepped in for the role. It is safe to say that Khaled Khaled features each and every fan favorite.

In addition to the tracklist announcement, Khaled dropped a snippet to visuals for his latest track “Sorry Not Sorry.” The historic moments feature Jay-Z, Nas, & James Fauntleroy. Knowing the history between the two New York emcees, this is one for the books of Hip-Hop history. While it is a coincidence that the two NY rappers have shared the same release date for years in the past, they are now trading bars on the same track.

DJ Khaled took to his IG to post the snippet if the video.

Peep the snippet video below.

The post DJ Khaled’s Upcoming Album Will Have Jay-Z And Nas On Same Song appeared first on The Source.